How Do I Get Rid of Unwanted Female Facial Hair?

Female facial hair—let’s talk about it

Many women have a genetic tendency toward excess hair growth, meaning they’re constantly battling with either dark, coarse hair or an extra layer of pale peach fuzz. Facial hair could also signal a hormonal imbalance, as with polycystic ovary syndrome. Or it could be due to the hormonal changes that accompany pregnancy and menopause.

How to get rid of female facial hair for good

Whatever the reason, you don’t have to live with it if it’s not something you’re into. There are a number of fantastic facial hair removal methods on the market. We’ll take you through the most common ones, listing their benefits and their drawbacks.

Lip Waxing
Yes, waxing removes hair at the root, but the downside? There are a few, including that waxing is a fairly painful treatment, only produces temporary results, and can cause ingrown hairs. And you have to let the hair grow between treatments, which can be an inconvenience. Waxing also carries the risk of burns and skin irritation.

Waxing is most ideal for less sensitive parts of your body, such as the legs, underarms, and bikini area. Because waxing is fairly painful, it’s not very ideal for your face – and if done incorrectly, waxing can cause bleeding and can even rip off the skin. Ouch! You should never attempt to wax at home unless you’re experienced with the treatment.

Vaniqa Cream
Vaniqa is a prescription cream that decreases hair growth by blocking the enzyme responsible for hair production. Without the enzyme, hair growth is partially blocked in that area and eventually may stop growing altogether. Because Vaniqa is not a hair remover per se, it is best used in conjunction with other hair removal methods. The longer the cream is used, the better the results. Vaniqa is most effective on facial hair growth, particularly on the upper lip, chin, and cheek hair.

The major downside of Vaniqa is that it’s only effective while it’s being used, so if you stop, the hair will grow back. And because it’s designed to only slow down hair growth, you’ll still have to wax or pluck, just not as frequently. Some people also experience temporary stinging, redness, and/or acne flare-ups where they apply Vaniqa.

Depilatory Creams
Depilatories contain an active ingredient which dissolves the hair shaft in minutes. The action of removing the cream using a spatula or sponge helps pull the dissolved hair away from the surface of the skin. Unlike shaving, which leaves sharp, stiff hair stubble just below the skin, depilatories leave a rounded, smoother edge. The at-home treatment effectively minimizes stubble, prolonging the appearance of hair regrowth.

Still, depilatory applications need to be repeated at least weekly, if not more often than that. You should look for creams specially formulated for the face, which are gentler than those formulated to use on coarse leg hair.

The drawback? Some people—especially those with sensitive skin—find that the chemicals in depilatories can cause irritation. In order to minimize redness and irritation, don’t leave the product on for longer than necessary. Most require about five minutes on the skin to start working. But if you’re sensitive, be extra cautious and use your discretion to see how much time your skin requires.

Lip Threading
Lip hair threading is an ancient method commonly practiced in countries such as Egypt and India, recently gaining its popularity in the United States. Threading removes hair from the follicle, making it similar to waxing or plucking.

How does it work? A cotton thread is pulled along unwanted hair in a twisting motion to trap hair in a mini lasso. This process lifts each hair right out of its follicle. Like most other hair removal methods, threading produces effects that are only temporary, lasting weeks at most.

It can also be hard finding someone experienced with hair threading. Unless you live in a large city, you may have a hard time finding a salon or spa that does threading. And if you do find someone, you need to make sure they’re experienced enough. If done incorrectly, the hairs can break at the surface and regrowth will show up much quicker.

Laser Hair Removal
This high-tech method of hair removal targets hair follicles with heat from a laser, [safely] damaging them to prevent future hair growth. Up front, it’s the most expensive hair removal option, but also the one that provides the best results and lasts the longest. Laser hair removal with Alexandrite, Diode, and Nd:Yag lasers, all of which are available at many dermatology offices (including LaserAway!), is typically less painful than waxing, doesn’t require growing out hair between treatments, and can result in permanent hair reduction after several sessions.

Lasers have long been most effective for dark hair on fair skin, but recent advancements now allow for treatments on all skin types, just as successfully.

Facial Trimmers
There’s a variety of facial hair trimming products on the market specifically designed for women. These function much like shaving – instead of targeting hairs by the root, facial trimmers remove hair at the skin’s surface.

Because facial trimmers don’t remove hair at the root, nor do they disturb the hair follicle, this means their effects are only temporary – lasting anywhere from a few hours to a few days.

A major downside to facial trimmers is that they leave hair with a blunt tip. The tip of the hairs might feel coarse or stubbly as they grow out, and might be more noticeable or appear darker during regrowth.

Upper Lip Bleaching
Bleaching facial hair won’t take the hair away, but can make it appear less noticeable as it lightens the hair to a light shade of blonde. To achieve this, the bleach is applied over the hair and left on for about ten minutes, actively taking the pigment out of the hair. It’s removed with cool water once the hair reaches its peak lightness. While similar ingredients are used for bleaching hair on the head, bleach formulated specifically for facial hair is much gentler.

Bleaching facial hair doesn’t give you a smooth and hairless surface, though. The hair becomes lighter, but it still may be noticeable, especially if you’re standing in the sun or a bright room. And as the hair grows, you’ll start seeing the natural, darker color of your facial hair, so the results aren’t all that long lasting. If you have a darker skin tone, know that facial bleaching will result in adverse effects; bleaching will cause your hair to stand out more due to the contrast.

Got facial or lip hair? Laser hair removal gets results for life

If you’re looking to permanently – and visibly – reduce your lip hair, then laser hair removal really is the best way to go. After a series of three to four short sessions, the hair on your lip will be reduced by up to 80%. And because the upper lip area is so small, each session should only take 15 minutes or less. Laser hair removal costs for facial hair are also extremely low. Why put up with constantly having to wax, trim, or thread your mustache hair? Once you’re done with a series of laser hair removal sessions, you’ll never have to think about – or see – that unwanted hair ever again!

We’ve committed over a decade to helping people of all skin types discover their best skin ever, with over 3 million treatments performed and new locations opening every month! We use state-of-the-art technology for maximum results, our clinics are supervised by board-certified, industry-leading dermatologists, and our treatments are implemented by registered nurses, nurse practitioners or physician associates who undergo one of the most comprehensive training programs in the business. Our mission is to make our clients feel beautiful by providing the best and most effective aesthetic treatments in the nation in a friendly, relaxed environment.

Ready to invest in yourself? Schedule a free consultation today by filling out a request form or calling the LaserAway staff at (855) 233-9134. Our nurses look forward to making sure your service and skin are as smooth as possible! 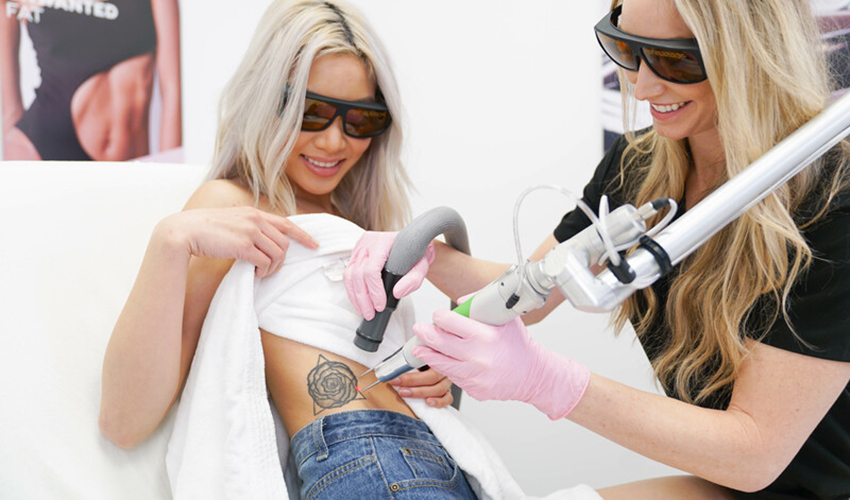 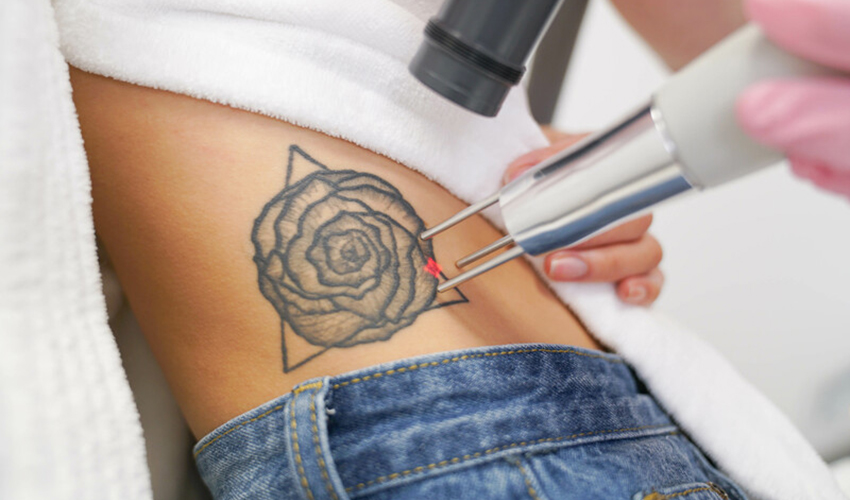 How Do Lasers Remove Tattoos? 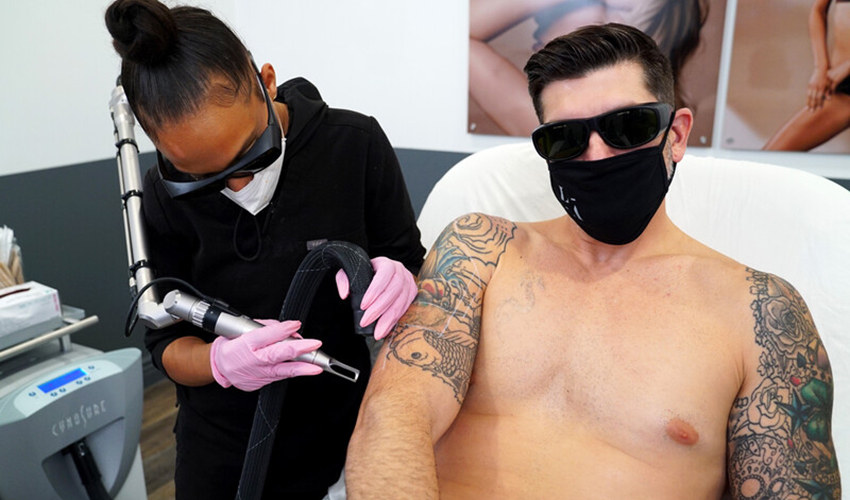 How Many Treatments Does It Take Before The Tattoo Is Removed?